Adult education throughout the history

History of adult learning is as old as mankind. The goal, content, form, learners and target groups were changing throughout the history, but the fact is that no progress of any kind was possible without adult learning. In some historical periods learning was more intentional, organized and structured and we could talk about adult education, in other it was more embedded in everyday life and work. It was always very much depending on the context (political, economic, social, etc.). Adult learning and education were pretty much a mirror of the epoch and an expression of its aspirations.

In his classical book ‘In quest of knowledge’ Colin Grattan (1955) is arguing that the great Neolithic Revolution and the rapid progress in the preliterate era are the ‘most remarkable demonstration of men’s educability’, with enculturation and acculturation as main forms of adult education. Later epochs brought variations, and we can recognize and follow four main sources and currents of thoughts in adult education throughout the history: first one coming from religious motivation and inspiration. An example for that are the early forms of learning among ancient Jewish desert tribes, where Moses could be seen as one of the first teachers of adults. Later on, many forms of religious teaching (encompassing broad range of knowledge and skills) addressed adults, and many have even highly organized forms like in Christian Middle age.

Second source was philosophical-cultural thought, starting with ancient Greece and ideas of great philosophers of that time, where education throughout life was seen as something good and noble. Their intellectual concern was realisation of potentials of individuals and achieving excellency. Many of later philosophical schools of thoughts and cultural endeavours included education of adults as the crucial part.

Third, practical strain has its origin in the work of craftsmen, peasants, soldiers, etcetera in the preparation for various types of work and various functions in some social groups in the community or in the state, or simply for activities done for living. The Roman time developed this kind of education for practical purposes (including for politics) and Middle Age brought up the education through gilds and other associations of artisans or merchants.

Fourth current has its origin in the ideas of social transformation and changing society. All revolutions and social movements used some forms of adult education as a power force in attempt to change people and society from early time till French and Russian revolution and Freireism in the modern times.

These currents could be followed in the historical development, but also in the modern time. The contents did develop and the methods too, but the main ‘motivation’ and social ‘legitimization’ could be still recognized.

The modern discourse of adult education

Modern discourse of adult education comes from the third source and neglects the others. Starting from Industrial revolution, pragmatic orientation was stronger and stronger. It was accompanied with the ‘revolutionary’ one, but it diminished with the time. So the modern adult education (especially in Europe) is preparation for world of work, for job and employment and for some of the functions in the society. This discourse is strongly promoted by some of the global players, such as OECD, ILO, World Bank, European Commission, while UNESCO tries to balance this discourse with a more humanistic approach, trying to offer a holistic view on adult education, expressed for example in ‘skills for work and skills for life’. Adult education is reduced to a ‘skills and competencies’ paradigm, which are rooted in the human capital theory and have a strong practical, utilitarian character. One of the main mechanisms to promote this discourse are the PISA and the PIAAC studies, which support not only the concept of skills, but also the idea of valuing only measurable skills. Modern adult education is dominated by paradigms of inputs and outputs, measures and indicators, competition, performances and achievements. Most of the time these paradigms and concepts are imported and sometimes uncritically applied in the field of adult education.

It is also marked by huge trust in technology as a solution for many of the educational problems, in ICT as a universal recipe and mean that will replace all others.
The discourse of lifelong learning was developed to express the continuous, lifelong character of learning, to put individuals in the centre and stress non-formal and informal learning. In the reality it superseded adult education and blurred its role and importance, reducing the whole responsibility (including the financial one) to the individual. Lifelong learning didn’t fulfil the ‘promise’, but led to the neglecting of adults in the educational life-span perspective, especially in the policy and financing.

The main challenge in developed countries

In the Sustainable Development Goals (SDG) and in the Education 2030 agenda educational goals and indicators for achievement are formulated and ways of monitoring are being developed. But the big question remains if the main approach is the right one. There is still a need to question the main premises of the adult education we have today, to reflect our background, the goals and presumptions and even the purpose. For developed countries the biggest challenge will be to recognize in time dangerous tendencies and coming challenges, such as domination of rhetoric over the implementation of global goals, neglecting adult education at all levels, a poor support to it, a narrow and reductive understanding of adult education, an overuse of utilitarian approach and a constantly shrinking space for civil society as one of the main partners in adult education. Adult education is not a trendsetter in social changes anymore, as it was many times in the history, but more an uncritical follower of contemporary ‘fashions’ and trends. Adult education is more and more seen as commodity, as private good, as a ‘product’ on the market and an approach supported by increased marketization and privatisation. Adult education is taken for granted and it makes public blind for the fact that it is disappearing from policy and funding plans.

Adult education in modern society is very much oriented on curing the consequences of big problems and don’t deal with the causes of it, like financial crises, refugee crises, degradation of environment, increasing violence and conflicts. Developed countries have a big responsibility in this development and adult education should help in recognizing it and in finding efficient, fair and sustainable solutions.

The main challenge in developing countries

The new global agenda (SDG and Education 2030) has a universal character, so developing countries should also follow the agreed goals and indicators. But in the reality, they are facing huge tasks in finding resources even for the very basic needs of their citizens and they will have more difficulties to implement even the part of the plans. The modern neo-colonial and globalised world (led by the needs of neoliberal economy) does not need educated, critical and open-minded citizens and will not support this kind of education and will not invest in it. Stuck between the strategy of ‘domestic resource mobilisation’ for education (which is hindered by poverty, wars, corruption, etc.) and ODA (official development assistance) (which is ‘annulated’ because of the debts, inefficiency and donor’s driven planning), developing countries have a ‘mission impossible’. For example, there is no real plan for the problem of 757 million fully illiterate people worldwide (circa 3 billion functional illiterate), which is a serious obstacle for any other endeavour in the field of adult education and for achieving other goals. The tendencies for privatisation and commercialisation of adult education are even stronger in these countries, supported by some donors and international agencies. They are also stuck in the matrix of quantophrenic, reductive ways of follow up and monitoring, together with non-adequate ways of policy transfer from developed to developing countries and some neo-colonial practices.

Searching for the way

Adult education can be a powerful tool to help developing countries to make progress in many sectors, but there are many preconditions that need to be done if this powerful ‘mean’ is to be used. Education agenda agreed on the global level showing the goal and the destination, but not the way to in.

In order to solve the problems in a sustainable way, adult education shouldn’t have a palliative character, but go deeper to the roots of the problems of the modern world and the situation in developing countries. It should ‘enlighten’ people in developed countries about the interconnectedness of political, economic and social phenomena. Besides, it should raise their awareness about the role of developed countries in contemporary problems of developing the world (including ideology, politics and military) and it should try to be one of the agents of social change and positive transformation of the modern world.

ICAE (International Council for Adult Education) promotes this understanding of adult education as transformative power for human rights and social justice, a mean capable not only helping people and communities to improve their lives, but also boosting the development of the whole society.

Katarina Popović: “I am a believer! – in adult education. It is my modest way to try to make the world a bit better place.” 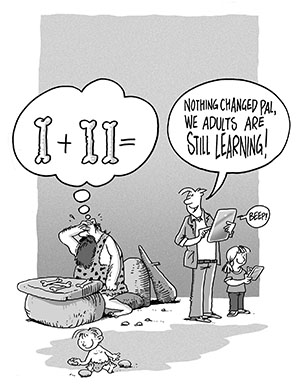