Not too long ago, retirement came with a gold watch, a retirement fund, and a do-nothing lifestyle. Things are changing: life expectancy is rising, the number of older adults (OA) is growing, health costs associated with ageing are escalating, and life transitions are multiplying. At the same time, OA are striving to remain active, healthy and productive members of society. Might adult education be one answer to sort through societal changes and life transitions and can education in the third age contribute to personal fulfillment, healthy life styles, and satisfy social and economic needs of OA? Could and should universities play a more substantial role in the continuing education for OA? For me, the answer is a resounding yes!

Learning communities for OA at universities

In order for this is to happen, universities in Canada (and elsewhere) need to create new and more comprehensive approaches to connect with OA to shift the current responsibility from cost-recovery continuing education units to a broader university commitment. By doing this universities can begin to build learning communities that expose OA to a full range of university resources and opportunities, including opportunities to participate in research, work on outreach activities, attend events and lectures, take part in intergenerational learning and even live on university campuses. Critical to building a more comprehensive approach is a university-wide commitment to engage OA that changes the question from Should universities serve OA? to How do universities best engage OA?

Reasons for Embracing OA at universities

There are reasons to believe the momentum created by the growing number, changing life styles, and concern for health and well-being of OA will move universities to play an active role in older adult education (OAE):

OAE has been an active interest to universities since the 1970s. While definitions of OAE vary somewhat, Ratsoy (2016, p. 79) described it simply in terms of age (50 to 75+ years), life stage (retired or at least not primarily employed) and comprised of formal learning (as contrasted with casual or informal learning) although not necessarily for credit towards a credential. Probably the best known form created to serve the learning/educational needs of OA is the University of the Third Age (U3A). Formosa (2014, p. 42) stated that U3As “have become the most successful educational institutions engaged in later-life learning”. The connections of U3As to traditional universities vary from a direct connection in France to the model adopted in Britain, where U3As, for the most part, operate independently from formal institutions on a “self-help approach based on the principle of reciprocity, of mutual giving and taking” (Formosa, 2014, p. 45). In the Netherlands, the equivalent of U3A are the HOVO institutes, which are allied with universities and offer academic-level courses for OA in over 30 centres throughout the country. Unique about the development of U3As in Australia was the creation of U3A Online to serve OA learners who are isolated geographically both within and outside Australia. In North America OAE has typically developed alongside already established adult education programs offered by university extension or continuing education units. More specifically in the USA, OAE developed in forms such as Institutes for Learning in Retirement, Elderhostel/Roads Scholar, and Osher Lifelong Learning Institutes. Interestingly in Canada, the first U3A was started in Quebec (the Francophone province with historic connections to France) at l’Université de Sherbrooke in 1976 and later (in 1978) at Francophone universities in New Brunswick. Along with OAE in French Canada, OAE developed from about the same time at universities in English Canada, but as was typical in America, alongside established adult/continuing education programs.

More of the same is not enough

The demand for OAE programs offered at Canadian universities remains high, so doing more of the same should sustain growth. But if universities are to strengthen their commitment to OAE, they will need to deal with challenges and take advantage of opportunities. In my view, to do this Canadian universities need to build viable organizational/financial models, create learning and engagement opportunities relevant to a changing OA demographic, increase participant diversity and strengthen institutional commitment to OAE.

1. Build Viable Organizational/Financial Models
While OAE has grown in popularity, programs have changed and most have grown, many re-organized, and others disappeared. In the study by Kops (2016) about 60% of the responding universities fully managed OAE within continuing education units with almost half of those offering open community educational programs directed to OA. The other universities (40%) offered OAE in affiliation with community organizations. Of the seven universities with affiliated arrangements, five had independent partnerships, whereby partner organizations had increasingly become more responsible for multiple functions of program design and delivery, making them even more important to sustaining university-based OAE. This transfer of responsibilities happened primarily, because of pressures on the cost-recovery financial models in continuing education units, which indicates changes were not strategic but circumstantial. In my view, a strategic approach is preferable, particularly in light of the opportunity for universities to engage and serve this growing OA demographic. Universities need to consider alternative funding models for OAE that move away from the cost-recovery models in place in continuing education units. Rather, OAE programs should be recognized as cost centers with operating costs underwritten by the university or operate as service centers that are fully funded by the university.

2. Recognize Changing OA Demographic
Along with the growing number of OA, the OA demographic is changing in terms of better health, higher education levels, increased technological understanding, and more active lifestyles. Universities need to consider how best to adapt to changes in learning interests and lifestyles. While doing more of the same kind of educational programs may sustain interest in the immediate term, I feel failure to adapt will potentially see a decline in participation as OA go elsewhere or find other ways to satisfy their learning and social needs and fill their discretionary time. For example, as more OA become adopters of technology (Smith, 2014), online programs could be more attractive, specifically to those beyond local geographic areas and, at the same time, reduce institutional and situational barriers to participation (Cross, 1981). Changing retirement patterns whereby OA either retire earlier or work longer need to be considered. For those retiring earlier, programs geared to later life changes and transitions will be of interest, while those delaying retirement could benefit from programs to prepare for second and continuing careers. Closely connected to changing retirement patterns and vitality of OA are interests to pursue studies that are different from their lifetime careers and, in some cases, even acquiring credentials in the form of certificates or degrees.

3. Increase Participant Diversity
As noted by study of the respondents (Kops 2016), there is a lack of participant diversity in OAE offered by Canadian universities. In addition, to strengthening outreach efforts to underserved communities, universities need to heed the advice of Pejic (2008) and Delp and Rogers (2011) to get to know their surrounding communities and learn how to reach out to OA living in these communities. As well, universities need to be proactive in efforts to recruit OA participants from underserved communities, including finding topics and learning formats that will interest and engage them.

4. Strengthen Institutional Commitment
There is no question that the number of OA in the Canadian population (and in other developed countries) is increasing, absolutely and proportionally, the benefits of education to the health and well-being of OA and their communities are evident, and OAE fits with a focus of universities on community engagement. Not clear is whether universities have the will to embrace this expanding demographic and develop university-wide commitment to engage OA. This means that universities need to go beyond the efforts of continuing education units to offer courses on a cost-recovery basis.

In my view, the Age-Friendly University initiative of Dublin City University (DCU) in Ireland is a great example of a framework to guide action towards this kind of commitment. The initiative began in 2012 with the development of 10 principles to guide higher education institutions in addressing the needs of OA (half of the guiding principles speak to education and OA). While OA are the focus of educational programming at a number of Canadian universities, to date only one Canadian university has joined the DCU initiative. More universities should take such steps to signal the inclusion of OA in the academic community of the university and make this important institutional commitment to engage OA. The evidence indicates they should, it is time to take action.

“As part of the lifelong learning journey, I believe adult education has the potential to allow older adults to live longer, healthier, and happier lives.”

Smith, A. (2014). Older adults and technology use. Pew Research Center. Retrieved from http://www.pewinternet.org/2014/04/03/older-adults-and-technology-use/. 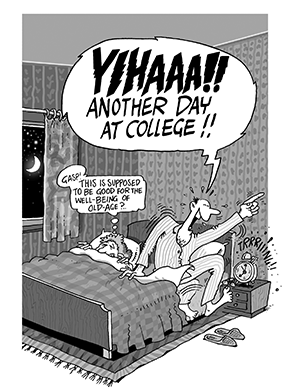